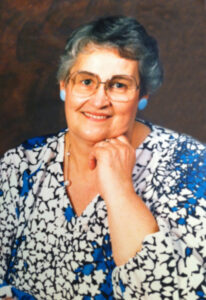 Born in Macklin, SK as the second youngest of 15, Edith was raised on the family farm at Denzil, SK during the Great Depression. She completed her public schooling in Denzil and the Convent at Prelate, SK. Later, she would complete diploma programs in Childcare and Social Work at Mount Royal College in Calgary. Taking a domestic position in Chauvin, AB, young Edith met her future husband, Walter Robison who had the neighboring farm. They married on July 4, 1949 and settled on the homestead at Chauvin, raising 4 children and farming through many uncertain and difficult, but also good years until 1968 when a move to Calgary was necessitated. Edith continued to juggle work and the demanding needs of her family for most of her life. Her passion to help others and champion for those in need defined her. She loved to sew, paint, and read but usually set these aside to tend to her people. Many lives were touched by hands of Edith. Even in the last weeks of her life, ravaged by the effects of dementia, Edith’s natural instinct to nurture surfaced daily to the delight of her family and caregivers. She loved and was loved. A Celebration of Edith’s Life will be held at Pierson’s Forest Lawn Chapel,( 4121 17 Avenue SE, Calgary) on Saturday, June 20, 2015 at 2:00 PM