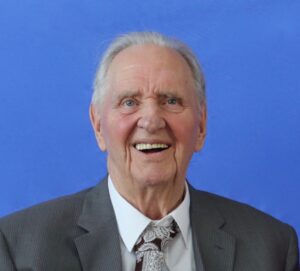 When we think of Charlie we see a man who would do anything for anybody and whose love for family was everything. He was a self-learned man who built three houses from the foundation up, built several vacation trailers and a motorhome, and fixed and repaired more cars for family and friends than we can remember. His abilities blessed many who couldnt do these things for themselves and would have done without if it wasnt for Charlie.

Charlie was orphaned at 13 years old and worked wherever he could until he was finally able to join the army during WW II. After the war ended he met his wife and worked various jobs until he joined the Calgary Police Service where he worked until retirement in 1982.

Charlie was a faithful member of the Church of Jesus Christ of Latter-day Saints. He served in a variety of callings and was very missionary minded. He and Muriel served a mission for the church together from 1990 – 1992 in Whitehorse, Yukon. He was never shy about talking about the church with workmen, doctors, cashiers, neighbors, etc.

Charlie was a very strong, tough man, but also gentle and kind-hearted. He loved children and was drawn to them and they to him. He took many of his grandchildren on vacation and provided them with many adventures.