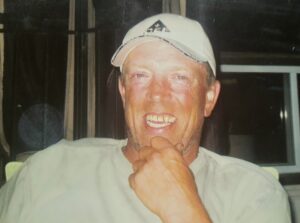 It is with heavy hearts that the family of Dwayne “Dewey” LeBlanc announce his passing on April 7, 2017 in Didsbury, AB at the age of 57. Dwayne was born in Drumheller, AB on July 14, 1959. He will be lovingly remembered by his son Wyatt; his sisters Colleen of Carstairs, AB, Laurie (Jim) of Airdrie, AB, Sherryle (Dale) of Drayton Valley, and Shonna (Wendell) of Crossfield, AB; and his numerous nieces, nephews, and other extended family members and friends. Dwayne was predeceased by his parents George and Marlene LeBlanc; and his brother in law, Frank Stapley. He worked as an accomplished tradesman with a Millwright ticket. He had many interests, which included hunting, fishing, camping, golfing, and rodeo. He was a loving father, brother, uncle, and friend who will be missed by all who knew him. A Celebration of Dwayne’s life will be held at Albert’s Patio & Grill in Didsbury, AB (2409 16 Street) on Wednesday April 12, 2017 at 1 pm. In lieu of flowers, those who wish to, can make a donation in memory of Dwayne to Rosebud Health Foundation www.rosebudhealth.ca