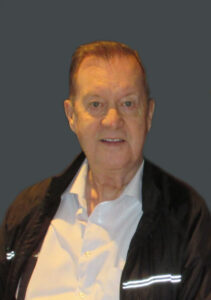 Doug Syverson passed away on Tuesday, January 26, 2016 at the age of 81 years. He is survived by his dear wife of 55 years Patricia Syverson, of Calgary; four daughters Pamela Whittaker (Kirk Nymann) of Naniamo, BC, Charlotte (Robert) McIntyre of Birch Hills, SK, Valerie Syverson of Calgary and Kathryn Cable of Canberra, Austrailia; ten grandchildren, Monica, Ian, Cassandra, David (Emily), Daniel (Rebecca), James, Tara (Andrew), Rachel (Mitch), Chad and Thalia; three great-grandchildren, Abigail, Elena and Declan; two sisters Beverly Granger of Nanaimo, BC and Myrna (Ed) Krakiwski of Calgary; a brother Terrence Syverson of Dingwall, NS; and many other relatives and friends. Born in Kincaid, SK in 1934, Doug was raised in nearby towns of Hazenmore and Meyronne. When he was 7, his father joined the army and his family moved to Regina, and later to Barrie, ON. After High School he joined the Royal Canadian Air Force where he served most of his time in France. He returned to Ontario for a time, but eventually made his way to Calgary which has been his home ever since. In Calgary, he met and married the love of his life Patricia and they were blessed with 4 daughters. Although he spent most of his working years as an operator in a fertilizer plant, the highlight of his career came later in life. Doug loved the time he spent working at the Calgary Zoo as a member of the Canadian Corps of Commissionaires. Doug was an optimistic and good humoured man who enjoyed a good joke. He was happiest spending time with his family, and relaxing watching movies or listening to music. A Funeral Service will be held for Doug at The Church of Jesus Christ of Latter-day Saints – Foothills Stake Center (30 Everstone Boulevard SW, Calgary) on Friday, January 29, 2016 at 11:00 am. Visitation will be held prior to the service at 10:30 am.