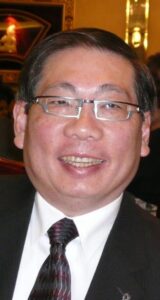 It is with heavy hearts that we announce the sudden passing of our brother in Calgary, Alberta. Douglas was born in Vancouver, spent his childhood in Hong Kong, and moved back to Canada in his early teens where he attended Eric Hamber High School. After graduation, he studied radio telecommunication, but later found his calling in the tourism and travel industry. Douglas loved to travel and had the good fortune of seeing many countries, while making meaningful connections along the way. Douglas spent over 16 years with Canadian Pacific Airlines as sales and service manager and later continued to focus on the air cargo industry with Air Cargo Traders as sales manager. In 2001, Douglas started up KISS Cargo, which he owned and operated until this spring. His health took a turn the last few months. Sadly, and unexpectedly, Douglas passed away suddenly as a result of a brain aneurysm. Douglas was predeceased by his mother Violet Louise, and father Peter Hing Yip. He is survived by former wife Peggy, older brother Barry (Linda), younger sister Jennifer McIver (Doug) and nephews Cameron and Cory. We are forever grateful to his friend Jack Bozek for watching over Douglas, and in particular, during the final hours of his life. A celebration of his life will take place at a future date. Messages of condolences may be forwarded to the family at www.piersons.ca