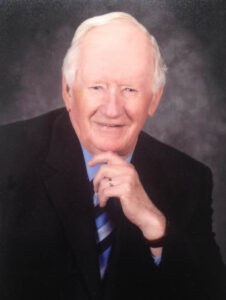 Doug Lauchlan, community builder, educator, arts leader, visionary, friend, father and grandfather, died just days short of his 85th birthday on Monday February 15. Doug’s contributions to the city of Calgary are immeasurable. He was president of Mount Royal College, head of the United Way , and General Manager of the Calgary Centre for Performing Arts to name a few. Doug was instrumental in the establishment of both the Esther Honen’s International Piano Competition and the Calgary International Organ Festival. He served his community on the boards of numerous large and small organizations, including the Banff Centre, Child Friendly Calgary, Global Fest and the International Avenue Arts and Culture Centre. His greatest gifts were inspiring people, bringing them together in common cause and resolving conflict. He loved people, politics (serving as leader of the Liberal Party of Manitoba), arts and music, and sports. He was a brilliant public speaker, a jazz piano player, and a talented golfer. His enthusiasm for everything that caught his interest was contagious. Doug was born and raised in Pine Falls Manitoba and graduated in theology from the University of Winnipeg – then called United College. He married fellow theology student Margaret Hanley in 1953 and theirs was a long and happy partnership, ending 58 years later with Marg’s death in 2011. Doug was predeceased by his eldest son John in 1982. He is survived by daughter Andrea Marantz (Josh), sons Michael Lauchlan (Marta) and Scott Lauchlan (Anneisa). He is also survived by six grandchildren Sarah (Andrew) Szabo, Noah (Lauren) Marantz, Mac , Kate , Natalie and Nigel Lauchlan. He also leaves three dearly loved great grandchildren – Jack Szabo, Isaac and Sadie Marantz. Doug is also survived by his only brother Ian and his family, and sister-in-law Helen Hanley. The family would like to thank Sonia Yudcovitch for her caring, loyal friendship to Dad in the last years of his life. Doug was a wonderful friend to many and leaves the world a much richer place for his part in it. He was a kind, intelligent man, who loved to laugh and treated every person he met with respect and genuine interest. He was dearly loved and will be dearly missed. Services will be held Saturday February 20 at 11 a.m. at Central United Church (131 – 7 Avenue SW, Calgary). In keeping with Dad’s life long commitment to Philanthropy, please consider a donation to your favourite charity.