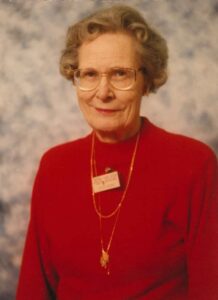 Dora Estelle Brown, age 92, passed away peacefully on January 16, 2018 at Foothills Hospital in Calgary, Alberta, Canada. Dora was born in Seven Persons, Alberta on July 19, 1925. She was the fifth of eight children and was raised on a farm near Gleichen, Alberta. Dora lived a full a productive life and is now reunited with her beloved husband, Lyle Raynold Brown, who died April 4, 1986. Dora and Lyle were married on April 9, 1947 and lived in Taber, Alberta where they raised their three sons.

Dora received a bachelors degree in education and was an elementary and high school teacher for 32 years. She excelled in art, pottery, and weaving. She loved to do geneology and read. Dora held a deep faith in God and Jesus Christ. She volunteered her time and talents by serving in various leadership and teaching roles in the Church of Jesus Christ of Latter-day Saints. Dora and Lyle served an 18-month Church mission in the Knoxville, Tennessee area. After her husbands passing, Dora went on to serve three additional Church missions in Hamilton, New Zealand, Los Angeles, California, and Salt Lake City, Utah.

Funeral services will held for Dora at the Church of Jesus Christ of Latter-day Saints – Calgary Stake Center (2021 – 17 Avenue SE, Calgary) on Saturday, January 20, 2018 at 10:00 am. with Bishop Mark A. Bingham presiding. Burial services will follow at the Taber Memorial Gardens, Taber, Alberta.,