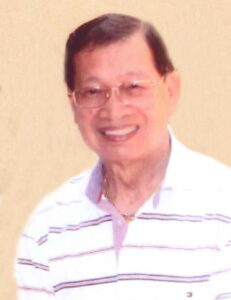 Donato Salvador passed away on Wednesday, November 4, 2020 at the age of 87 years.

The youngest of 3, Donato (Don) Roque Salvador was born in San Mateo Rizal, Philippines on April 7th, 1933. It was here that he was raised along with his brothers: Vicente and Alberto, and later studied at the University of Santo Thomas. He immigrated to Houston, Texas in 1971, and later moved to Prince Albert, Saskatchewan, and Red Deer, Alberta, before permanently settling in Calgary, Alberta where he dedicated his working life to the Canadian Pacific Railwayâ€™s Alyth Office until his retirement in 1994.
Don was passionate about cars, and as a hobbyist would purchase used vehicles that he would lovingly restore to new found glory. In the early days of this venture it was not unusual to find up to five or six different vehicles parked in his driveway, all in various stages of completion.

Don was an active weekend athlete, and could often be found playing tennis or going bowling. In the early years of his retirement he joined a number of bowling leagues where he often placed in the top three by seasons end. Don was also an avid Professional Boxing and Wrestling Spectator, and would eagerly cheer on the prowess in the ring of many he closely followed including: Floyd Mayweather, Oscar Dela Hoya, and of course his all-time favorite, Manny Pacquiao. Having played Basketball in his youth, Don was also a dedicated fan of the NBA and with great pride and enthusiasm cheered on the Toronto Raptors to their Championship win in 2019.
Don held a natural born talent for singing; he would frequently break into song even during the most mundane of everyday activities, and loved to share his talents in hosting Karaoke nights at his home. He and his beloved wife Flor frequently opened their hearts and home to University Exchange Students, some coming from as far as Japan and Iran. In fact, his engaging warmth and hospitality made for an open invitation for anyone to feel welcome in his home. With him no one was a stranger for very long; this especially included many of his wifeâ€™s work acquaintances and friends from The Manor Village Life Centers, all of whom quickly became his â€œniecesâ€ and â€œnephewsâ€ in surrogate. A loving husband and friend, many were surprised to know of his advanced age or that he had been living for so many years with cancer in his shadow. His youthful smile, charm and quick wit so masterfully disguised the illness that he battled for far too long. In the early morning hours of Wednesday November 4th, 2020, his long battle came to itâ€™s end with his wife Flor, and loyal cousin Pillar by his side.

Don now joins in heaven his parents Cornelio & Inez, and his brother Vicente. He continues to live on through his wife Florita, brother Alberto, his sons: Rey (Mel), Roy (Vivian), Ricky (Daphne), Mark (Maida), his daughter May (Danny), and his beloved Grandchildren: Reinah, JC, Jowel, Sarah, Stephen, Steffany, Drex, Jemae, Marky, Ethan, Vincent, and Gigi. He is also survived by his many loving nieces, nephews, Godchildren, and long-time dear friends: Dominodor & Daisy DeLeon, Sonny & Lily Flores, as well as countless surrogate family and friends that heâ€™d taken in over the years of which there are far too many to make mention.

Many, many heartfelt thanks to Dr. Madrelejos for his many years of care and service, the Emergency Department and Medical Staff of the South Calgary Health Campus, as well as the wonderful staff of Agape Hospice especially Dr. Lauf, Nurse Mary, and Yuki for providing him with comfort and dignity in his final moments.
As a result of these unfortunate times, a service and reception will be held at a later date; our deepest gratitude to everyone who has reached out with expressions of care, concern and thoughtful condolences.

â€œThere are no goodbyes for us. Wherever you are, you will always be in my heart.â€