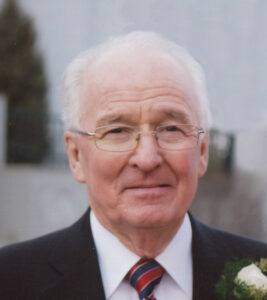 Donald S. Hansen passed away peacefully in his Calgary home of 51 years, where he lived alone since the passing of his cherished wife Judy in 2015. He will be lovingly missed by their five children: Janice (Jeff) Champion, Karen (Steve) Meyer, Dave (Lanna) Hansen, Kristine (Kent) Stringham, and Steve (Chelsey) Hansen, as well as 23 grandchildren and 8 great-grandchildren. He was the son of the late Sverre and Fern Hansen, and was predeceased by his sister Sonja (Garfield) Cox. He is survived by his younger sisters Edith (Reid) Hardy, and Gwen (Paul) Coleman. Don was raised in Diamond City until moving to Edmonton to attend the University of Alberta, where he met Judy. Their marriage on August 30th of 1961 began a lifetime of adoration and devotion to each other. He found joy as a father and grandfather, and is remembered by his children as a kind, gentle, and wise father who was constant in his selfless devotion to them. He started his teaching career in Calgary, while concurrently completing a Master’s in Educational Psychology, and subsequently worked as a child psychologist at the Calgary Board of Education. Don was a devoted member of The Church of Jesus Christ of Latter-day Saints. His faith was exemplified by a lifetime of humble service to others, and he particularly cherished his time serving with Judy in the Cardston Temple. He experienced a brief period of loneliness without Mom, but we should now find joy in knowing of their glorious reunion. A Funeral Service will be held for Don at The Church of Jesus Christ of Latter-day Saints – Parkland Stake Center (14540 Parkland Blvd. SE, Calgary) on Tuesday December 20th at 11:00 am, with visitation beginning at 9:30 am. Interment will follow at Okotoks Cemetery.