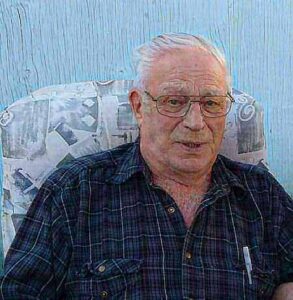 It is with great sadness that the family of Don Doherty announces his passing on Saturday, March 17, 2012 at the age of 86 years. Don will be forever loved and remembered by his wife and long time love of 56 years Rose; his children: Debbie, Pat, Darryl, and Margo; his grandchildren: Mellissa, Donald (Tamara), James; and his eight great grandchildren; his kid sister Darlene; as well as many nieces, nephews, in-laws, and friends. Don was predeceased by his son Ken and siblings: Glen, Sheila, Jim, and Shirley. Don was born in Maymont, SK but called Quill Lake home. He joined the military and served with the P.P.C.L.I. during WWII. Don worked for the City of Calgary until his retirement. Throughout his life, he had a passion for wood working and would build anything you needed with love and care. When Don was not tinkering in his garage, he was out visiting and B.S.ing with friends over a coffee or beer often lamenting about his Saskatchewan Roughies. Don put his family first and always made time for them. He was a favorite Uncle and loved family gatherings listening to stories and better yet telling them. Don was a compassionate caring person with a heart of gold, he was well liked and loved by all who knew him. He will continue to live on through the legacy he has built during his life with those he leaves behind. At Don’s request, there will be no formal Funeral Service held.