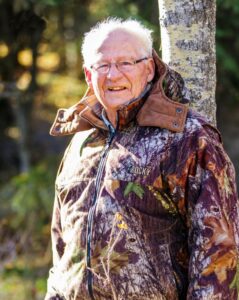 Don Gauthier passed away at home on Monday, April 4, 2016 at the age of 80. Although “Uncle” Don did not start a family of his own, he was loved greatly by his many nieces, nephews, cousins, and extended family. He spent most of his time after retirement staying with family and helping out wherever needed whether it was through farming and taking care of animals to doing carpentry work and mechanics. Don was born in Calgary at the Grace hospital and spent his childhood on his family’s farm west of Calgary. He went to school at Brushy Ridge School until grade 9, when he moved to Calgary with his parents where he finished high school at Sunalta School. After graduating, Don went to work for AGT, where he continued working until his retirement. He then moved around a bit residing in several different homes. He moved to a farm in Springbank, then north of Cochrane, and finally to Trochu with his mother. After his mother, Florence, passed away he moved to Standard to help farm and do taxidermy work with his nephew Perry. Don also spent his weekends with his cousin Keith’s family in Water Valley, where he liked to help take care of all the different species of birds they owned. Don was great when working with his hands, doing beautiful carpentry work by making furniture and also scenes for taxidermy. His mind was always sharp and he loved to learn, he could finish crossword puzzles in no time and he knew all about history of many different cultures and he always had some facts and to tell anyone who was keen to learn. Many people loved to listen to his stories and lessons. Don is survived by one sister, Marie Ellis, and one brother, Gordon Gauthier, and also by his many nieces, nephews, and cousins. Don was predeceased by his father, John Gauthier in 1967, his mother Florence Gauthier in 2001, and by his three other brothers.