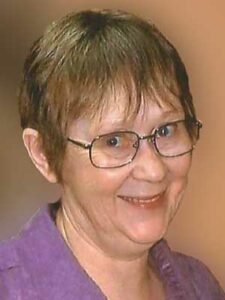 Dianne Olive Fountain was a loving wife, mother, grandmother, great-grandmother, sister, and friend. She passed away on January 7, 2022 at the age 76 after a courageous battle with cancer.

She was born to William and Hazel Park on April 1, 1945 in Calgary, Alberta. After high school, she trained to become a nurse in Medicine Hat. She met her future husband, Russ at the Junior Ranks Mess Halloween party in 1969 and married shortly after. They celebrated their 50th anniversary in August 2020.

With Russ in the military, it meant moving every couple of years and she left her nursing career to raise their family. As they settled after each move, she met many friends, especially connecting to those who were into crafting like herself.

Dianne was fond of crafting, volunteering, old school country music and her action movies. She volunteered with Girl Guides first with her daughter where she was Brown Owl for their brownie unit in Petawawa, ON. She then later helped with group committee with her son’s Scout group in Greenwood, NS.

Her volunteering continued when they lived in Yarmouth, NS where she helped with Royal Canadian Legion (RCL), Branch 61 with the Ladies Auxiliary. Shortly after Russ retired in 1998, they moved back to Calgary to be close to their children and Dianne continued to volunteer with RCL at Branch 286 while they lived in the NE of Calgary. When they moved to the SE a few years later, she then volunteered at the Ogden House Senior Citizen Club. On top of that, Dianne, with Russ at her side, also helped support local community groups and charities by volunteering at bingos and casinos.

She passed her passion for crafting onto her daughter and son. She looked forward to Kari’s card classes each month where along with family and friends they created cards designed by her daughter, chatted and snacked on delicious treats. Her son uses his love of crafting as a scouter with Beaver Scouts and he cherishes the googly eye container she passed onto him to this day.

Each fall it was time to attend the Christmas craft fairs, which she did with Kari and Palle, shopping to find unique treasures and gifts for her loved ones. It also meant it was time to send out the yearly Christmas cards to family and friends with Russ. She heard from many friends from across Canada who always looked forward to receiving their card from her and Russ each year.

She is preceded in death by her parents William and Hazel Park, sister Lorraine Coulthard and brother-in-law, Herbert (Allen) Coulthard

In lieu of flowers, donations may be made to the Canadian Cancer Society.  The family wishes to extend their sincere gratitude to the staff at Foothills Hospital Unit 47, Chinook Hospice and Pierson’s Funeral Home.