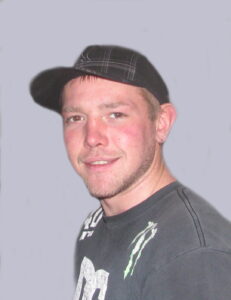 It is with deep sorrow that the family of Dennis Eric Wolfe announces his passing in Calgary Alberta on Wednesday, May 13, 2020.

Dennis was born on Christmas Day 1987 in Creston BC. Dennis got his name from his Uncle Dennis Wolfe and Estherâ€™s cousin Dennise. Esther moved the family to Yahk BC and later to Golden BC where Dennis attended Golden secondary School up to grade 10. Dennis moved to Calgary AB in 2005 and took various jobs before finding that he really enjoyed roofing. Dennis had aspirations of owning his own roofing company and started Wolfe Right Roofing and ran it on a small scale until he was injured as a pedestrian by a vehicle which left him unable to work full time. Dennis loved to Ham it up and make people laugh. He did not care much for cars, but a fast truck always caught his eye. Dennis was musically inclined and liked to play the guitar.

Due to COVID 19 restrictions, a private family service will be held on May 25, 2020 with a webcast for those unable to attend. Please contact Pierson’s Funeral Service (403-235-3602) for details.