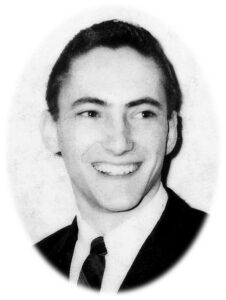 DOUCET, Dennis Ephrem Joseph March 10, 1946 March 24, 2013 Dennis passed away peacefully in his home on March 24, 2013 at the age of 67 years. He was born in Edmonton, Alberta where he attended St. John’s Boys College, later furthering his business education at the University of Edmonton, paving the way for a long career employed by the Royal Bank, eventually settling in Calgary in 1974. Dennis will be sorrowfully missed by his beloved partner Barry Morash and dog Charlie. He is survived by his three children; sons Dean Boland [Gail] & David Doucet [Kimberly], all of Calgary, AB and daughter Kim Wytinck [Matthew] of Airdrie, AB. He has seven grandchildren; Darrian, Hunter, Kiyara, Dezirae, Karissa and the twins Lilia & Eli. Dennis is also survived by his sister Joanne Shadin [Mike, Troy, Travis] of Surrey, BC. He is predeceased by his father, Armond Doucet, mother, Ella Paradis, & siblings Raymond, Gloria and Bobby. Dennis was a member of the Corpus Christi Church choir for 10 years, participating as a Eucharistic minister as well. He also spent time working for the Bishop of Calgary after leaving the Royal Bank in the 1980’s. Dennis spent many happy years working with the Church, Lions Club of Calgary & Knights of Columbus, volunteering and helping out various charities & causes, he was very good with people and had a very kind heart. He loved to entertain with dinner parties, play cards, watch old movies, read and listen to new age and classical music, Zamfir was one of his favorite. Dennis spent his last days working as a peace officer with the Commissionaires for the Calgary Parking Authority. His funeral will be held on Wednesday, April 3, 2013 at Pierson’s Funeral Home [4121 17 Avenue SE, Calgary, AB] at 2:00 p.m. The family would like to thank all relatives and friends for their prayers and kindness. In lieu of flowers, please make a donation to the Christian Children’s Fund in his honor.