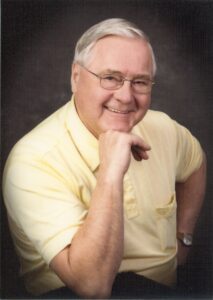 Dennis Anthony Loroff, age 72, of Calgary, Alberta passed away on Monday, September 26, 2016 in Calgary. He was born on August 26, 1944 in Medicine Hat, Alberta. Dennis married Maxine Carol Louth on July 9, 1966. He worked at Canada Safeway for 25 years then changed careers and moved on to become an Insurance Broker/Financial Advisor until his retirement. He was also on the Finance Committee at Holy Trinity Catholic Church. Dennis is pre-deceased by his parents, Anton “Tony” Loroff and Esther (Ruck) Loroff and in-laws, Orval Louth and Myrtle (Zinger) Louth. Dennis is survived by his wife of 50 years, Maxine Loroff; three daughters, Sherry (Don), Shawna (Shane), Kara (Warren); six grandchildren, Taryn, Chase, Brayden, Cole, Rhiannon and Austin; and his sister and brother-in-law Sandra and Lloyd Michalezki and their two daughters, Lori and Lynn. He also leaves behind his “adopted” dog, Tessa-Lynne. Dennis was an avid camper, curling enthusiast and antique tractor puller/announcer. Dennis was always ready with his extensive joke repertoire and never missed an opportunity to orchestrate a practical joke. He participated actively with his children and grandchildren and never missed an opportunity to cheer them on. Dennis was a social butterfly and could get anyone’s life story within a few moments. Those who knew Dennis knew that his world was held together by his family and his magnets. Dennis and Maxine enjoyed their trip to Italy. Dennis loved seeing the Coliseum up close, said it was the most amazing thing he had ever seen. Until we meet again Dennis/Dad/Papa”THIS IS REALLY LIVIN”. The family will receive friends at a Visitation to be held at Pierson’s Forest Lawn Chapel on Tuesday, October 4, 2016 from 6:00 -8:00 PM. Funeral Mass will be held at Holy Trinity Catholic Church at 1:00 PM on Wednesday, October 5, 2016 directly followed by a Celebration of Life at 3:00 PM at the Inglewood Curling Club. Everyone is invited to attend any or all of the services.