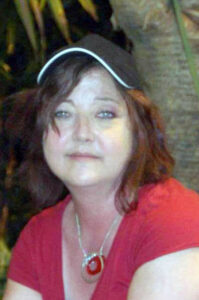 Debbie died at her home after a courageous battle with Lupus and COPD. Debbie fought with a fierce determination for the people and things in her life that mattered most. She loved the cats in her life, Ewok, Ginger and Karma. They had a special bond with her. Debbie was a caring friend who gave of herself even when she was struggling with her own health issues. Debbie worked at Safeways for the past 19 years where she had made so many good friends who mourn her death.

Debbie is survived by her long time friend, Doug Smith, her son, Jeff Cote and her daughter Kyla Williams. She is also survived by her grandchildren, Noah Cote, Kiara, Matthew, Zachery and Taylor Wiltshire. Debbie was predeceased by her parents and good friend Lynnette Johnson.

Debbie’s Celebration of Life will be held on Saturday, March 30, 2019 from 6:00p.m. to 8:00p.m. at Pierson’s Funeral Service, 4121 – 17Ave, SE. Following Debbie request, she has been cremated and her ashes will be spread in the ocean by her son Jeff at a later date. In lieu of flowers, if friends so desire, donations may be made to the Lupus Society of Canada, www.lupuscanada.org/ways-to-donate.