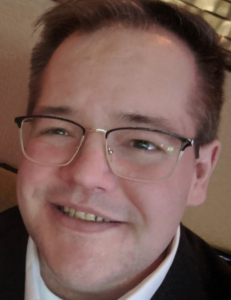 David John Crockett III, 44, passed away peacefully in his home on Sunday, December 22 of 2019. He is survived by his beloved wife Carolyn, and their two children Sarah and John. His father, David John Crockett II (Dianne) of Calgary, Alberta; his sister Jill and her children, Matty, Abbi and Valarie; his step-siblings, Justin, Brandon and Samantha and their families also mourn his loss, as well as his Grandmother Jolene Reber, numerous aunts, uncles and cousins. He was preceded in death by his mother Kathleen Dawn (Reber) Crockett in 2005, grandparents Calvin Reber, Shirley and Burt Ross, David, and Elnora Crockett.

David was born in Provo, Utah in 1975, and was raised in Calgary, Alberta, Canada. He served a 2-year mission for the Church of JESUS CHRIST of Latter-day Saints in Brussels, Belgium from 1995 to 1997. He met Carolyn upon his return and they were married on December 18, 1998 in the Cardston, Alberta temple. They moved to Provo together, and David graduated Cum Laude from BYU with a bachelors in accounting in 2001. They then moved to Texas where he worked in management consulting with Bain & Company. He and Carolyn also started their family there with the birth of their first child Sarah in 2002. Shortly after Sarah arrived, David and his family moved to the Las Vegas Valley where he worked at GES in the trade show industry, quickly rising to the position of Vice President. Carolyn and David welcomed their second child, David John Crockett IV in 2006. Their family made their home in Henderson, and David resided there until his passing.

David enjoyed spending time with his family, playing his guitar, music editing and production and listening to his favorite band U2. He loved biking, skiing, volleyball and basketball and had a love-hate relationship with golf. He was an intelligent, knowledgeable man who loved his wife and children dearly. Although his passing was far sooner than expected, he lived a fulfilling life and was loved by many.