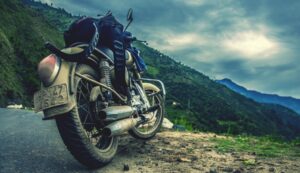 David Francis Larmour (HOTDAWG) of Calgary, Alberta passed away October 25, 2019 of prostate cancer at the age of 71 years.

David was born in Regina, Saskatchewan on November 6, 1947 to Art and Mima Larmour.

The family moved to Barrie, Ontario where David attended North Collegiate High School. Upon graduating he continued onto the Ontario College of Arts where he received a Degree in Arts and Literature.

David was a respected piping designer in the oil and gas industry for many years, working for companies such as Tri Ocean, Bantrel, and The Wood Group. David was also a model maker who supervised the model shop at Novatel creating models of early cell phones.

Dave’s love for motorcycles started at an early age and never stopped growing though the years. He loved all bikes but his passion was for BMW’s and side cars.

David is survived by his wife or 43 years Deb, his sisters Rosemary (Bruce) and Heather (Tom), and his nephews Marc, Philip, and Drew.

It was always David’s wish that his friends would ride their motorcycles to “A Celebration of Life” which will be held at a later date.