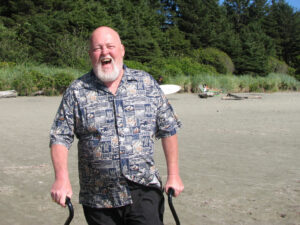 STEVENSON, DAVID GORDON Born May 3, 1947 in Yorkton, Saskatchewan, Beloved husband of Valerie Anne Stevenson (nee Byman) passed away peacefully with his family by his side, February 11, 2016. He is survived by his loving wife Val, daughter Carolynne (Jesse), Calgary Alberta, Sons David (Stephanie), Williams Lake BC, Jared (Samantha), Castlegar BC, and by his wonderful, cherished and loved grandchildren, Maddison Stevenson, Yorkton, Saskatchewan; Reginald and Sidney Stevenson, Castlegar BC. David was predeceased by his mother, Freda Patience Stevenson (nee Noble), his father Samuel Watson Stevenson, and his brother Graham Lawrence Stevenson. David “Red” was born and spent his early years in Yorkton Saskatchewan, where he developed his passion for playing and later coaching ball, as well as playing cards. He moved on as a teenager to Fife Lake Saskatchewan and on the death of his father when David was just 16, he took on the responsibility of helping his mother to manage the Fife Lake Hotel. From there he moved on to Winnipeg Manitoba where while employed with the T. Eaton Company, he met and married the woman who he always told “I love you with all my heart”, right to the very end. Many wonderful years were spent in Winnipeg and at the cottage in Lake Forest Estates, Gimli Manitoba. It was during these years that an accident left him with multiple surgeries and resulted in his requiring orthopedic boots and canes to walk. Then the family moved back to Yorkton Saskatchewan, enjoying small town life, where he particularly enjoyed his Crib game at the Legion and being that booming voice cheering on his sons hockey team. But, when his cardiac problems arose, he moved on to Calgary Alberta where the health care he needed was more readily available. David lived life to the fullest, he had no regrets. His presence filled a room and his laughter and smile was un-mistakable. He faced many challenging health issues over the years and always remained positive and accepting of the outcomes. His years of pain and suffering are now over. He was a mountain of a man with a kind, gentle and generous heart. He will be remembered and dearly missed by those whose lives he has touched. Always those canes and boots and his passion for playing cards, especially crib. He was so very proud of all his children’s accomplishments and so very proud to have had the opportunity to have lived to see and enjoy his beautiful grandchildren. He always said what a lucky man he was to have his family. As per David’s wishes immediate cremation has taken place with a private family gathering. As his grandson Reg said, “Grandpa has grown his Angel Wings”. A small graveside gathering will occur Saturday, April 23, 11:00 am, in Yorkton Saskatchewan, Yorkton Cemetery, Legion Plot, where some of David’s ashes will be laid to rest with his Father, as per David’s wishes. All those who wish to attend are welcome. Dave, dad, grandpa, we will see you on the other side and until then “may God hold you in the palm of his hand”. Forever loved, forever missed.