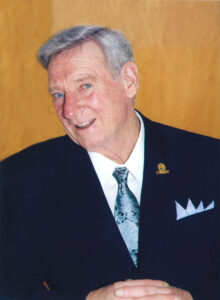 It is with great sadness that we announce the sudden passing of David Andrew Hanson of Calgary on May 28th, 2016 at the age of 79 years. He was initially brought out to Alberta to serve with the Princess Patricia’s Canadian Light Infantry, and stayed here after meeting his wife Gloria. David spent most of his career years at Canadian Liquid Aire, during which he received many awards for his safe driving. Most recently he was happily retired. He enjoyed history, and kept up to date with current events by reading the newspaper and watching the news. He also loved eating Chinese food at the Hong Chow, traveling, and spending time with his family. David was predeceased by his first wife Gloria in 1979 with whom he had two daughters, and second wife Carole in 2009. He is survived by his brother Bob (Margaret); his two daughters Linda (Reg), and Suzanne (Rob); his step-daughter Jenny (Dave); and five grandchildren Victoria (Ben), Kathleen (Steven), Geoff (Amelia), Leoni, and Fiona. He is also survived by nieces and nephews. A Visitation will be held for David at Pierson’s Forest Lawn Chapel (4121 – 17 Avenue SE, Calgary) on Thursday, June 2, 2016 from 6:00 – 8:00 pm. A Funeral Service will then be held at the same location on Friday, June 3, 2016 at 11:00 am. If friends so desire, donations in David’s memory may be made to CNIB (www.cnib.ca). The family also wishes to acknowledge with much gratitude the wonderful staff at Atria Retirement Canyon Meadows.