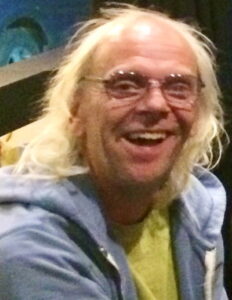 It is with sadness that we announce the passing of Darryl Dutchak, on Tuesday, June 29, 2021, at his residence, after a challenge with Cancer. The world was forever changed when Darryl was born in Winnipeg on April 13, 1964.

He was predeceased by his father Russell, and his mother Hazel.

Darryl spent his school years in Steinbach, Manitoba. After leaving school, he moved to Winnipeg. Darryl lived a unique lifestyle due to his personality and career choices, first as a Carnie, then later becoming an Ironworker. These careers gave Darryl the opportunity to travel the world, visiting many cities in the USA, Canada, isolated camps up north, and even overseas. He fell in love with Alberta, lived in Edmonton and Calgary his adult life, eventually calling Calgary home.

Darryl was a social person who loved a good long chat, and would strike up a conversation with anyone. He made friends easily and would reach out to them through visits or long phone calls. He genuinely showed interest in your life. Darryl was a person who could be friends with someone from any walk of life, and was known to help anyone in need, giving them his last dollar if they needed it.

When visiting Manitoba, Darryl made every effort to see his Aunts, Uncles and Cousins in Beausejour, Manitoba. His Uncle Harry and Uncle Roy were very special to him.
Seeing that he spent his adult years away from family, Darryl moved back to Manitoba for a few years to spend time with his Mother, before her passing. This was especially heartwarming to witness. Although the loss was very difficult for Darryl, spending time with her gave him a lot peace.

Long late night walks, a good T-bone steak , lettuce drowning in vinegar, beer, Judge Judy, keeping up with current affairs, reading the newspaper cover to cover, and most recently keeping up with his hometown news online, were all things Darryl enjoyed.
Darryl loved life, and lived it on his own terms. He was not without struggles in his life, but endured the hard times with help from the faith in God he was taught, and believed.
He had a distinctive laugh, a smile that reached his eyes, and had colourful language. If you met him, you would never forget him. He had a personality like no other.
So many people have shown love and concern for Darryl, and have shared their stories of him.

Thank you to his health care team, the people he did business with, and his many friends and neighbors. Darryl would mention you often by name, and your care and concern for him is appreciated. Thank you also, to Pierson’s Funeral Service, for your professional care.

Rest In Peace Darryl, you will be missed.

“The Lord bless you and keep you;
The Lord make his face shine on you and be gracious to you;
The Lord turn his face toward you and give you peace;”
Num. 6:24-26

No formal service will be held. A private gathering will take place in Manitoba at a later date.