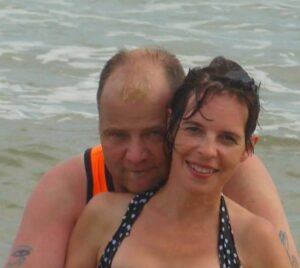 Immortal beloved wife Darla passed away peacefully (at the age of 39 years) surrounded by family and friends on July 30, 2014 at the Tom Baker Cancer Centre. She fought a brave battle with brain cancer until God called her home to end her suffering. Darla is survived by her beloved husband Kres Slattery; children, Kristian, Erik and Emily Allan, Stefan and Brayden Slattery; grandchildren, Ellie, Elfie and Isaiah Slattery; sister Kelly (Adam) Lee; brother Brad Bjarnason; loving parents Linda & Lorne Bjarnason; mother-in-law Angie Slattery; grandmother-in-law Adeline Errelat; and dear friends who helped with her care Lesley & Heather. Darla was born and raised in Calgary. She lived a life full of love and service, which was seen in her volunteer work. She helped find Loops for Troops in Calgary and also worked a great deal with the Cinderella Project. She loved fishing, gardening, gaming, crafting and her Pugs, but her family was her greatest passion. She was a friend to all who knew her. A Visitation will be held for Darla on Thursday, August 14, 2014 from 6:00 – 8:00 p.m. at Pierson’s Forest Lawn Chapel (4121 – 17 Avenue SE, Calgary). A Funeral Service will then be held at Centre Street Church (3900 – 2 Street NE, Calgary) on Friday, August 15, 2014 at 11:00 am., with interment to follow at Queen’s Park Cemetery. If friends so desire, donations may be made in Darla’s name Loops for Troops (c/o RAUSI Foundation 801 11 Street SW Calgary T2P 2C4) . Please send flowers to Pierson’s Funeral Service.