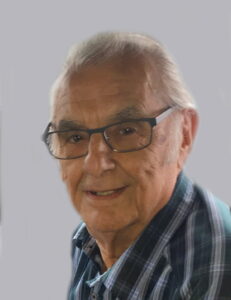 It is with heavy hearts we announce the passing of Daniel Oancia; loving husband, father and grandfather. Daniel passed away peacefully at home surrounded by his family, on Tuesday, April 21 after a short but brave battle with cancer.

He will be dearly missed by his loving wife of almost 60 years, Elizabeth (Liz), his son Dean, daughter Sharla and grandson Tanin, all of Calgary.

Daniel is also survived by three sisters; Marion Radu, Lorna (John) Adamack and Jane (Egon) Fritzsche, all of Regina, Sask. and one brother Bill (Shirley) Oancia of Strathmore, along with many extended family members and friends. He was predeceased by his Father Gabriel Oancia in 1979, his Mother Mary Oancia in 2002 and his Brother George in 2003.

Dan was born in a small town called Lakenheath, Sask. near the Flintoff area where he was raised with his five siblings until they relocated to Regina when he was a teen. He worked in the plumbing and electrical field for many years and had the ability of fixing nearly anything.

It was at a dance in Belgonie, Sask., in 1961 where he met his life long love, Liz. They moved to Calgary, married and raised two children, Dean and Sharla. Dan then spent most of his working years as a dispatcher in the trucking field where he remained until he retired in his early 70â€™s.

After retirement he loved spending time puttering in the garage, working in his yard, watching hours of sports, mostly wrestling (much to moms dismay) and of course, spending time with his family.

He and Liz spent many an hours at the kids house; helping Dean, usually with Mom in the house and Dad in the yard, and making sure everything was looked after at Sharâ€™s.

These times also allowed him to create a very special bond with his only grandson, Tanin. Whether it was building puzzles or teaching him his handy skills and many more bonding activities , Grandpa kept Tanin entertained and gave him skills and memories that will last him a life time.

He had a wonderful sense of humour, was caring, kind, considerate and helpful by nature and had a big heart for babies – he couldnâ€™t pass a little one without a peek and a big smile.

He was a loving husband, father and grandfather, always putting his family first. He filled their lives with much love and happiness, will be deeply missed and remain forever in their hearts.

A special thanks to his Family Doctor, Peter Thornton, his most caring nurse Helen Davies and the rest of the health care aids who helped dad, and the rest of us through this difficult time. We would also like to mention thanks to Michael Pierson and Carolynne Stevenson, Father Andrew, and friends and family who sent messages of condolences, flowers, and warm regards.

A private family service will be held on April 28, Dan and Lizâ€™s Anniversary, at Piersons Funeral Home with Father Andrew Maruszczak of their Parish, St Albert the Great, officiating. Cremation will follow.