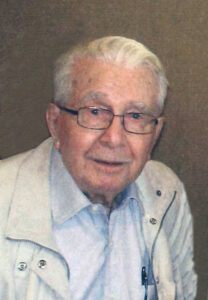 C.V (Neil) Thiessen Feb 24 1919 – July 15 2016 Neil Thiessen passed from this earth to be with Jesus after a brief illness on July 15, 2016. Neil leaves his cherished wife Ellen, his son Greg and wife Laurie Ann, daughters Linda and Colleen (predeceased) and her husband Darryl Speer, grandson Paul and wife Janice, granddaughter Stephanie, and great grand children Keagan and Amara. Neil was predeceased by his parents Frank and Helena (Peters), and his step mother Agatha (Wiebe).

After growing up on a farm near Kane, Manitoba, Neil served with the Royal Canadian Navy during WWII.

As a husband and father, Neil showed great love for his wife Ellen and family. He loved music which he demonstrated by his support for school choirs, bands and orchestra. He sang in the Bethesda church choir (Winnipeg) for many years and then with the Good News Singers (Calgary) in his later years.

Neil made his career in education, first as a teacher and principal in Grunthal, Manitoba, then in Fort Garry (Winnipeg) as a teacher, principal, assistant and superintendent of schools for Division #5. He was subsequently retained by three school divisions to complete the development of the South Winnipeg Technical Centre.

Neil served on numerous boards and committees. He also served on the Bethesda church board and as president of the Canadian Sunday School Mission.

He was a member of the International Gideon Association in Mesa, AZ and Calgary.

After his retirement Neil and Ellen moved to Calgary to be closer to their children. They wintered in Mesa, AZ for many years to also be with Linda.

Neil was a blessing to many and will be sorely missed.

Donations to the Gideons in Neil’s memory would be greatly appreciated.