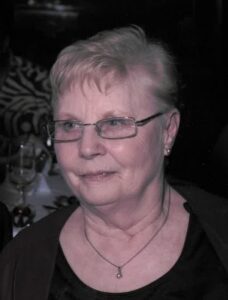 It is with profound sadness that the family announces the passing of Constance “Connie” Eleanor Babkirk (Brietzke) at the age of 80 on April 6, 2016 in Calgary, Alberta, Canada. Connie passed away peacefully surrounded by her family.

Connie was born on June 20, 1935, in Calgary, Alberta, Canada to Walter and Margaret “Peggy” (North) Brietzke. At the young age of 20, Connie was widowed with two small children and a third on the way. However, five years later, she was blessed to find love again when she married her soul mate and the love of her life, Dale B. Babkirk. They had four more children and were happily married for more than 54 years.

As a young girl Connie enjoyed Highland fling and Irish dancing. As a young woman she taught dancing, later in life she drove cab, and when her children were older she worked at the post office sorting mail. Connie also volunteered with Radio Community Watch in Calgary for 11 years, directing traffic and helping to maintain order during public events.

Connie was a great mother whose family meant the world to her. She was an avid curler, she enjoyed skiing, camping, and loved to knit & crochet items for her family & friends. Connie was involved with her church, which included being one of the ‘Krazy Ladies’, who encourage each other and reach out to help others. We extend a special thank you to the ‘Krazy Ladies’ for all of their love and support to Mom & Dad during her long illness. Connie was very generous and, along with Dale, was happy to help out her children and give to various charities such as World Vision, Gospel for Asia, and Vision Thailand. Because of their generosity she and Dale could never resist filling the living room with gifts for their family at Christmas.

Connie found salvation through Christ at a young age and came into a closer relationship with him as an adult. She chose to trust in him through some very difficult times. She looked forward to being released from her disease and going to heaven to be with her Saviour and was comforted to know that she would spend eternity with her family and friends. Connie is lovingly remembered and missed by her family. She was a remarkable lady who touched many lives and will long be remembered by all whom knew her.

The family would like to extend their gratitude to Dulcina Hospice and their staff for the amazing care that Mom received. We would also like to thank the Pulmonary Diagnostic Clinic, her pulmonologist, Dr. Charlene Fell, RN Kirk Mathison and all the healthcare workers who have helped in so many ways.

A memorial service will be held at Abbeydale Christian Fellowship, 1352 Abbeydale Drive SE, Calgary, AB on April 23, 2016 at 1 o’clock pm.

In lieu of flowers, memorial donations may be made to the Canadian Pulmonary Fibrosis Foundation (cpff.ca).