You are here: Obituaries / Cleo Bilton 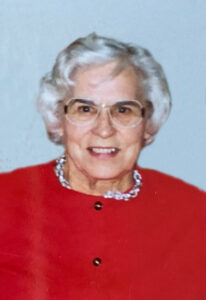 Cleo Bilton passed away peacefully November 13th, 2018 at the age of 103. She was preceded in death by her husband Stanley R. Bilton; parents James and Clydia Pearson; brothers Kenneth Pearson and Reece Pearson; sisters Lois Winters and Ethel Weir; and her son James N. Bilton. Cleo was born in Fairview, Utah on December 5th, 1914. Family circumstances brought her to a farm east of Calgary in 1925. Cleo married Stanley R. Bilton on October 30th, 1937 in Calgary. She is survived by her children Lynne Hannay (Rick), Anne Abbott (Chris), and John Bilton (Jana); her sister Beth Marles; grandchildren, Jed Hawthorne (Kelly), Paul Hawthorne (Lindsay), Scott Hannay (Lindsay), Brandon Abbott (Allison),Margaret Elliott (Oliver), Heather Abbott, Matthew Bilton, Sarah Wells (Weston), Tanner Bilton, and J. Blake Bilton. Cleo was also blessed with 10 great grand children. As a family we appreciate the care and support Cleo received from Agecare Seton, we also appreciate the nurses and Doctors that attended to Cleo over the last several years. We as Cleo’s children offer a special thanks to family Dick and Sue Pearson, Charlie Pearson, and friends Dot and Ralph Eloff, and many others who offered service and friendship to Cleo in her advanced years. Cleo requested a special thanks to the “Second Sixties Hiking Club” for “the pleasure of leaving our footprints together on the good earth”. She hiked with the club for over 25 years – well into her 90s – and we all feel this added to her longevity. She is a member of the Church of Jesus Christ of Latter-day Saints, and in the years after the death of her beloved husband Stan she held dear to her faith in Jesus Christ and his plan of redemption. Services for Cleo will be held Monday, November 19th, 2018 at Pierson’s Funeral Home, 4121 17th Ave. SE Calgary. Viewing from 9:00 – 10:00 am, Funeral service at 10:00 am with a lunch reception to follow the service. Interment at Burnsland Cemetery