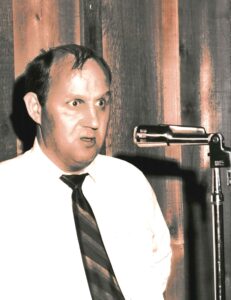 Clement Blakeslee passed away on Monday, April 20, 2020 at the age of 86 years. He leaves to mourn his daughter Liz Austin (Todd) of Austin, TX; granddaughter Alex Wilson (Robbie) of Raeford, NC; grandson Chance Austin of Lubbock, TX and many more family and friends. He was predeceased by his wife Mary, and dear friends and companions Sylvia Berteau and Margaret de Jong.
Clem, who was born blind, was raised in Leon, Kansas and attended The School for the Blind in Kansas City. He attended and graduated from numerous universities before moving to Winnipeg, Manitoba and finally Calgary, Alberta. Clem married Mary whom he cared for during the most precious time of both of their lives. Clem was first and foremost a Social Scientist, a Local Broadcaster with numerous media affiliations in Calgary and his most proud role as a Professor at the University of Calgary.
Although legally blind, Clem was the most well-read person you would ever meet as he would spend all of his time listening to audio books and arranging/re-arranging the family library of printed works. Mary was an accomplished author whom Clem always proclaimed was the most outward thinking of the two of them. He adored the childrenâ€™s books she wrote and the social messages she conveyed. They truly were fully synchronized in life.
Clem also loved animals, especially his â€œweeâ€ dog Coco.
Clem’s family and friends would like to express their gratitude to the staff of the Rockyview General Hospital for their excellent care.
No formal funeral services will be held for Clem. If friends so desire, donations may be made to the Calgary Humane Society (www.calgaryhumane.ca/donate).