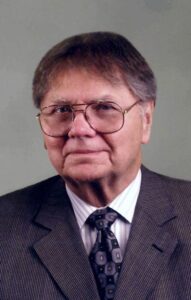 Clark Thomas Leavitt was born on April 17, 1928 in Cardston, Alberta and passed away peacefully in his sleep on April 2, 2018 in Calgary, Alberta, just two weeks shy of his 90th birthday.

On July 17,1952, Clark married his sweetheart Norma Dean Bullock, of Barnwell, Alberta for time and all eternity in the Cardston Alberta Temple.

Following his graduation from Medical School, he completed a prestigious residency and fellowship at the Mayo Clinic in Rochester, Minnesota while earning a Masters of Science from the University of Minnesota. His specialty was internal medicine with sub specialties in chest diseases and allergies. Clark began his private practice in Calgary in 1958, moving to Los Angeles from 1964 to 1967 to complete additional training, returning to Work and live in Calgary until his retirement in 1998.

Clark was blessed with a brilliant mind, an unquenchable thirst for knowledge, wide ranging interests, tireless energy and a deep love for family. He lived a purpose driven life and had an unconquerable soul. He was confined to a wheelchair and bed the final year of his life but showed remarkable grace, humor, and dignity throughout. He would often joke that “he was in the thick of thin things”. His intellect was keen but was outmatched by the size of his heart. He spent his professional life healing his patients and inspiring his family and friends by his tireless work ethics. He showed his love of family by authoring several substantial works on the Leavitt, Bullock, and Remington families. He built apartments and the family cabin at Shushwap Lake where he enjoyed spending time with family and friends. He was humble, kind and generous. He was an active member of the Church of Jesus Christ of Latter Day Saints and held many callings including Bishop. A Funeral Service will be held for Clark at The Church of Jesus Christ of Latter-day Saints – Heritage Chapel (935 Heritage Drive SW, Calgary) on Saturday April 7, 2018 at 10:00 am. with a visitation from 9:00 to 9:45 am. A graveside service and interment will be held in the Glenwood Cemetery, Glenwood Alberta at 3:30 pm.