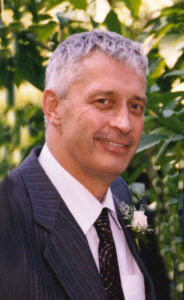 Clark Sloan passed away on Thursday, September 3, 2015 at Agape Hospice at the age of 66 years. He is survived by four children Casey Sloan (Leslie), Jen Schenk (Jon), Scott Sloan (Kate) and Jill Sloan (Adam); Eleven grandchildren; his mother Evelyn Sloan; Six brothers and one sister; and a large extended family. Clark was predeceased by his father Clell “Curly” Sloan and a brother Todd.

Clark was born and raised in Calgary where he was a gifted athlete, teacher, coach, mentor, counselor, psychologist, father and friend. After his accident and long rehabilitation, he received a Doctorate from the U of C and spent his career helping others with disabilities at Spinal Chord Injury Alberta, where he was a dedicated advocate for those who suffered. He will be dearly remembered by all who knew him.

Relatives and friends are invited to visit at Pierson’s Forest Lawn Chapel, 4121 – 17 Avenue SE on Friday, September 11 from 7:00 to 9:00 pm. A Funeral Service will be held for Clark at The Church of Jesus Christ of Latter-day Saints – Crescent Road Chapel (202 Crescent Road NW, Calgary) on Saturday, September 12, 2015 at 11:00 am, with visitation from 10:00 to 10:45 am prior to the service. Cremation will follow. If friends desire, memorial tributes may be made to Prostate Cancer Canada or Spinal Chord Injury Alberta