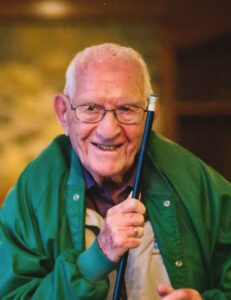 Kelly was born in Assiniboia, SK and raised on the family farm just south of Assiniboia, the youngest of his seven siblings. Growing up he loved playing baseball and worked with his father on the farm. He joined the army as soon as he could to serve his country in WWII and served in Italy for 12 months and was redeployed into the Netherlands for two months until the war ended.

Following the war Kelly returned to Assiniboia where he met and married Rita and they were blessed with three children. Kelly was a devoted family man and active in the community where he served as a member of the Volunteer Fire Department, coached baseball for his sonâ€™s teams and with Rita was the number one fan at both his sonâ€™s hockey games. He worked for the C.P. Railway for 24 years, joined Canada Post and was eventually transferred to Saskatoon, SK where he retired. Kelly was a fun loving individual who loved dancing, singing, camping, baseball, golf and playing crib. Upon retirement Kelly loved spending winters in Mesa, AZ. with Rita and they moved to Calgary where Rita passed away in 1995 after 45 wonderful years of marriage.

Kelly was blessed to meet his second wife, Dagny in Calgary and they were married in 1998. This expanded his family as he welcomed Dagny’s daughters, and their families into his. They enjoyed spending time with both families, dancing, and spending winters in Mesa, AZ with their snowbird friends. Kelly particularly loved singing to various seniorâ€™s groups in Calgary as a member of the band called Mop N Glow. After 18 wonderful years of marriage, Dagny passed away in 2015.

Kelly continued to enjoy the company of his many friends at the Prince of Peace Retirement Home playing cards, pool, socializing and watching his favourite sports teams, the Toronto Blue Jays and Calgary Flames. He always shared his good humour and gentle guidance with his family and friends. Kelly’s last 15 months were in the superb care of the staff at the Colonel Belcher Veterans Care Home.

A Funeral Service will be held for Kelly on Thursday, January 7, 2021 at 10:00 am. Due to the pandemic attendance will be by invitation. Those wishing to participate in the service from home may do so by clicking the link below. In lieu of floral tributes, memorials in Kelly’s memory may be made to the charity of ones’ choice.