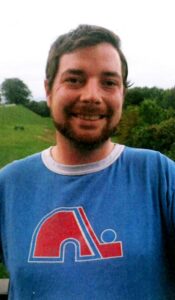 KELLY, Christopher, 34, died suddenly and unexpectedly on Monday, January. 29, 2018 from injuries sustained in a one vehicle accident in Calgary, Alberta.

“Your life was a blessing, your memory a treasure. You are loved beyond words and missed beyond measure.” – Anonymous

Christopher David Kelly, fondly nicknamed “Topher”, “Chris” or “Kix” by his loving family and friends was born July 5th 1983, in Montreal Quebec. As a teenager Chris attended Westmount High School. Later he helped his brother Ryan open the Restaurant Machiavelli as the chef in Montreal 2006 and then moved to Newfoundland in 2010. In 2013 he moved west to Calgary Alberta where he worked at Pulcinella and held the esteemed position of Sous chef. It was here that he met his love Martina.

At the time of his death Christopher worked at the popular Restaurant & Bar Merchants as a cook. In his free time Chris loved to travel with Martina and they recently returned from a dream trip to Italy. Chris also loved music, gaming, cooking, board games, animals, laughing and telling stories. Christopher was also a proud lifelong Habs Hockey fan. Chris always had an easy smile for friends and strangers alike.

Chris is survived by his loving parents, Brendan and Nancy (Walsh) Kelly, his brother and best friend, Ryan Kelly and supportive partner Brandy Giesbrecht, and his beloved spouse Martina Spada. He will also be missed by numerous aunts, uncles and cousins.

Memorial donations can be made in Christophers name to the Terry Fox Foundation (www.TerryFox.org)

The family wants to thank everyone for the outpouring of support they have been shown.