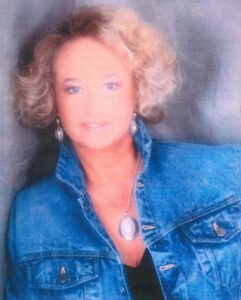 Christine Ririe Borowski passed away on April 30, 2019 at the age of 74. Despite being a life of the party type of person, at her request there will not be a funeral service or public viewing (she didn’t want people staring at her), only a graveside service. Her request for no obituary is being overlooked (maybe at great peril).

Christine Wilde was born in Magrath, Alberta on July 12, 1944, the first daughter to Wallace and Virginia Wilde. Two more daughters, Miriam and Susan came along later to complete the family. Many of her fondest memories were of living on a farm a few miles outside of Raymond, Alberta where she enjoyed growing up with her ‘Wilde’ cousins who lived half a mile down the lane. The family moved to the bright lights of Raymond when she was around Grade 8.

Chris attended Rick’s College in Rexburg, Idaho for a year and then moved on to the larger social scene at Brigham Young University in Provo, Utah.

Age 22 found her in Calgary, working for an insurance company. Chris enjoyed curling and her roommate Francis invited her to join a Catholic youth curling league. Well the ‘Mormon’ girl ended up on Stan Borowski’s curling team which led to dating, a proposal and finally marriage on July 8, 1967. A honeymoon to Hawaii started their married life.

Chris was a stay at home mom for Patrick, Amber and Jade. While the kids were growing up, she demoed food products at the grocery stores on weekends and Friday nights. She smiled at the masses and handed out food samples. And then there was the “route”. She worked tirelessly delivering The Bargain Finder newspaper every week, lugging those bundles of newspapers into her car and out to the businesses. She always wanted her kids to have a few extras. She sewed, cooked, camped, did crafts, church callings and set an example of a woman who was talented and devoted to her family and was a hard worker. It was in her genes.

As the kids grew older, a new adventure awaited her. Chris and her friend, Lin Snowdon launched ‘The Old Curiosity Shoppe’ in Glenmore Landing. This popular and beloved tea room was to be her passion for the next 12 years. Following the shop’s closure, Chris and Lin ran a wedding decorating/catering business for a few years.

Family vacation time usually took them to British Columbia and the western United States in the Nomad travel trailer. Later in life, the trips were mostly to New Jersey and Colorado to visit her children.

Chris was diagnosed with MS while in her 30s, but that didn’t slow her down much until the last 5 years of her life. She had an outgoing and fun personality and was a faithful member of the Church of Jesus Christ of Latter Day Saints.

Chris was a collector. People who knew her would recall her passion for baskets(100+) and hats(100+), several closets full of clothes, many, many shoes and an impressive collection of rings and jewellery as well as many hat boxes. The few times they had a garage sale, Stan was instructed not to sell any of her stuff. So Stan has been quietly taking trips to Goodwill as well as being a regular contributor to charities collecting used clothes.

Christine is survived by her devoted husband of 50 years, Stan; sister, Susan; her children. Patrick (Jane), Amber (Jamie) and Jade (Jen) as well as 6 grandchildren and 3 great grandchildren.

A Graveside Service will be held at Okotoks Cemetery on Friday May 10 at 11:00am. Please meet at The Church of Jesus Christ of Latter Day Saints Willow Park Chapel (940 Acadia Drive, Calgary) Procession will depart at 10:30am.