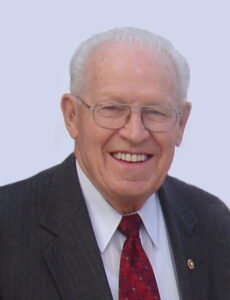 Ches Pierson passed away peacefully in his sleep on January 23, 2021 at the age of 93. Ches was predeceased by his wife Joan on August 20, 2019; by his four siblings – Grace West, Dennis Pierson, Clinton Pierson and Pauline Bietz; and a grandson Nigel Scott.

Ches was born in Lethbridge and raised in Jefferson and Sterling, Alberta. After High School he attended Brigham Young University and then served a mission for the Church of Jesus Christ of Latter-day Saints to England, a time in his life that he cherished. After returning from England, he met Joan Rose, the sister of one of his missionary companions. Soon after they were engaged and married in the Logan Utah Temple. They began their life together in Calgary where they settled and raised their family.

Ches worked in various positions until he was offered the opportunity to work in funeral service, his life long desire. He began at Foster’s Garden Chapel, then later moved to Cy Foster Gooder Funeral Home. He left funeral service for about five years to work at Cowley and Keith Real Estate, a move that allowed him to use his organizational and social skills.

During this time, his son Val began working in Funeral Service which provided many family and friends to continue to be cared for by a Pierson family member. After the sudden collapse of Cowley and Keith and without employment, our family decided to open our own funeral home. Ches, Joan & Val, along with the support of many renovated a building & opened Pierson’s Funeral Service in Forest Lawn in 1983. This was the realization of a life long dream and they worked tirelessly to ensure the success of the business.

Ches and Joan served two missions for the church, first in Oakland, CA and then in the London England Temple. Upon returning to Calgary, they moved to the community of Oakridge and then when Joan’s health began to fail, into Garrison Green.

Ches loved to serve others and he loved to work! In his younger years, he supplemented his income by teaching Dale Carnegie, which enhanced his skills in public speaking. He served in many positions in the Church, including Home Teacher, Bishop, Patriarch and other Stake callings, and a variety of callings as a teacher. Rotary was an important part of his life and he was a member of the Rotary Club of Calgary East.

Ches loved to garden and couldn’t walk past a weed without stopping to pull it out. He also loved reading and capturing all of the details in any magazine or newspaper. He clipped, copied & mailed articles to many friends and family. Personal notes of appreciation and praise were sent to many, whether it was for music he heard, talks he slept through, or any praiseworthy accomplishment. Although Ches’ resources were limited, he was generous to a fault, giving whenever he saw a need. He had an eye for detail and was meticulous in every way. If there’s an error in this obituary, he’d find it. He loved his sweets and it’s fitting that his last meal ended with his birthday cake & ice cream.

Ches loved each and every one of his children, grandchildren and great-grandchildren. He could remember their names and how many there were, showing his love in his own unique way. Through thick and thin we love our dad, grandpa and great-grandpa.

A visitation will be held on Tuesday, February 2 at Piersonâ€™s Funeral Home, 4121 – 17 Avenue SE from 6:00 to 8:00 pm with a maximum of 20 persons attending at one time. A Funeral Service will be live broadcast on Wednesday, February 3 at 11:00 am. Interment will follow at Queen’s Park Cemetery. Memorial tributes may be made to the charity of your choice.