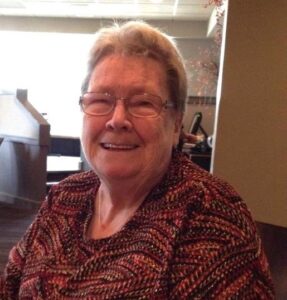 Mildred was born in Winnipeg, Manitoba on September 10, 1931 to William and Charlotte Lodge. Mildred was raised and attended school in Pointe du Bois, Manitoba and married Norman Olof Byman of Lac du Bonnet, Manitoba August 13, 1949. Together they raised their eleven children in Winnipeg and Calgary.

Mildred was a stay at home Mom, fabulous cook and loved knitting for her family. While Dad was still with her, they so enjoyed their holiday to England and Sweden to visit extended family. After Dad’s passing, Mom continued her love of travel especially to Hawaii. Mom had a passion for ancestry and was always researching. Mom was an honorary lifetime member of the Swedish Lodge in Calgary.

Regardless of the long travel distance between Mom’s children, grandchildren and great grandchildren, she always displayed her sincere interest, love and pride for all of them.

In accordance with Mom’s wishes there was no service. A viewing for immediate family was held on June 20, 2016 at Pierson’s Funeral Service, Garden of Peace Chapel, Calgary, Alberta with cremation June 21, 2016. Messages of condolence for the family may be offered online at www.piersons.ca