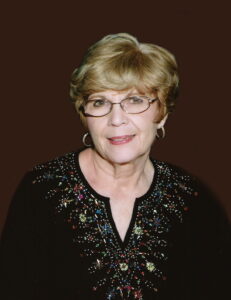 It is with great sadness that we announce the passing of Charlotte Lauralee Root on the morning of July 16,2020. She was a wonderful wife, mother, grandmother, great grandmother, sister and friend to many people in her 81 years on earth. Charlotte is survived by her beloved husband, Leon, four daughters and their husbands, Laurie (Bo), Karen (David), Holly (Michael), Janice (Joe), and her sister JoAnne and many more family and friends. She is also survived by 10 grandchildren and 7 great grandchildren along with several nieces and nephews. Charlotte will be excited to reunite with her parents Maurice and Dorothy Carter, her brother â€œButchâ€ Carter, her grandparents and her much loved father and mother-in-law who all passed before her calling.
Charlotte was born in Winnipeg and moved to Edmonton in the early â€˜50â€™s. She graduated as a nurse from the University Hospital in 1960 and loved being able to help people. She married her husband in 1961 and spent her next few years as a full-time mother raising 4 daughters. She was proud of being a mom to her oldest daughter and a set of triplets with only 2 Â½ years separating the four of them and she was very good at it. After the girls were in school, Charlotte re-entered the work place and eventually found her niche in parent and family counselling. Her work included treating psychiatric patients at the Misericordia Hospital in Edmonton and operating a private practice, specializing in the relatively new field of Art Therapy. She loved to continue her close connections with her nursing classmates and she became a 30 year member of the Beta Sigma Phi sorority. During her later years she enjoyed traveling and made three trips to the UK and many states in the US as well as cross country travels in Canada. After retirement in 2000, she moved to Calgary from Edmonton and in 2014 moved to Parksville on Vancouver Island, returning to Calgary in 2017. Her dementia finally forced her to move to a long term care facility in 2018 where she was treated with compassion and dignity. Her family would like to thank Dr. Oyebanji and all the staff and caregivers, particularly in the Gardens at Bethany Riverview, for all their kindness and support to Charlotte and her family during her stay there.
Because of the Covid-19 situation, a private graveside ceremony will take place at this time. Once the pandemic has passed, we plan to hold a Celebration of Life for Charlotte.
It is a time of sadness for those of us left here but we are happy that Charlotte has been freed from what must have been such a frustrating period in her life. Charlotte loved butterflies and now she has been freed to fly as she likes.
We will always remember.
In lieu of flowers, a donation may be made to the Alzheimerâ€™s Society of Canada (www.alzheimers.ca) or Bethany Riverview (www.bethanyseniors.ca).