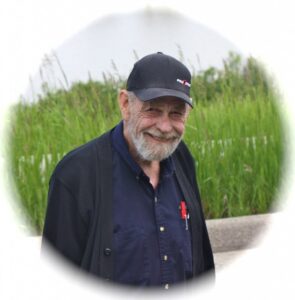 Born October 14, 1926 in Moose Jaw, Sask to Daniel Charles Cooper and Ann Elizabeth Scotton of England, Bill attended school in Moose Jaw, spending his summers helping his uncles on their farms and swimming in the local river and pool.

He was an excellent swimmer, winning many awards, including an Olympic tryout.

He was also active in hockey and baseball and he never missed a dance at Temple Gardens.

As so many men were heading overseas, Bill, as a teenager went to work for CPR as a locomotive fireman until he, too, enlisted and served with the King’s Own Rifles for the duration of WW II.

After being discharged, he worked at a variety of jobs in both Canada and the U.S., returning to the career he loved most – railroading.

After 38 years with CNR – on steam and diesel, including a few derailments and a serious head-on, Bill retired as a Locomotive Engineer in 1991.

Bill briefly met Marj Lewis, the love of his life, in Jasper in 1953 and they instantly disliked each other, but after reconnecting in 1964, they eloped on a locomotive.

They raised their family in Kamloops, BC where they lived for 40 years before moving to Calgary in 2006, enjoying old and new friendships, taking many short camping trips, and regular trips to Jasper. Bill was always at Marj’s side at “Jasper Daze” where one of their greatest joys was reuniting with family and old friends.

Bill was a real jack-of-all-trades and was always solving problems and fixing things. His greatest passion was doing woodwork in his shop with his dog at his feet.

Bill was pre-deceased by his parents, his son Mark and his sister, Doris Faryon.

He is survived by his wife, Marj, sons Doug (Veneta) of Stirling, AB, Paul (Karen) of Grande Prairie, AB, Todd of Calgary, daughters Joanne (David) Caruso of Lethbridge, AB and Barbara (Graeme) Boman of Richmond, BC, 10 grandchildren and 6 great-grandchildren and brother-in-law, Bob Lewis (Jean) of Kamloops, BC. as well as many nieces, nephews and cousins. Bill was a member of the Brotherhood of Locomotive Enginemen as well as a member of the Church of Jesus Christ of Latter Day Saints.

It was Bill’s wish that no funeral be held and his ashes be buried in Jasper.

He was a huge supporter of organ donation and in lieu of flowers, please consider signing your organ donor card and/or make a donation on Bill’s behalf to the Jasper Museum, Box 42, Jasper, AB TOE 1E0 or to the Veteran’s Food Bank of Calgary, 4619-6 St. NE, Bay #1, Calgary, AB T2E 7C3 or the charity of your choice.