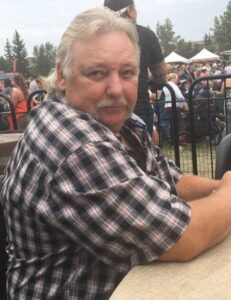 Charles Malcolm Martin passed away suddenly on March 11, 2020. Charles was born in High River, Alberta in October 1962. Preceded in death by his parents Eva and Charles and Sister Cory. Survived by his wife of 15 years Leslie, son Dylan, daughters; Ashley and Katie, grandchildren; Mason, Skyla, Araya, Ava and Austin sister LaVerne and brothers; Dale, John and Bob.
Charles grew up in Alberta, he had an exciting life where he dabbled in bull riding and the ranching lifestyle. When he settled down in Calgary he met and married his wife in 2005. He eagerly took on being a full time dad and grandfather. He started a business with his wife and soon turned it into a father and son painting company. When he wasnâ€™t busy painting he was busy being an amazing grandpa to which all his grandchildren adored him; he loved being a dad and grandpa. He enjoyed being outdoors and camping with his friends and family. He was always listening to music and had so much personality to keep any conversation going. Chuck was a great story teller and captivated many people with his smile and laughter. He was the type of man to drop everything to help and would do anything for his family and all those close to him. His amazing hugs will be deeply missed by all and his memory will live on through those who had the pleasure of knowing him. He will be deeply missed by his wife, children, grandchildren, in-laws, family and many friends. We love you Chuck!!

The Celebration of Chuck’s Life has been postponed for a later date.