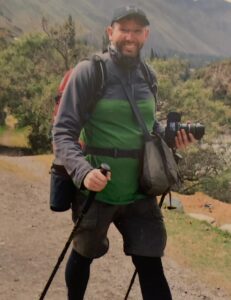 With deep sadness we share the passing of Jeff at his home surrounded by family on 21st of April 2021 after a brief and courageous struggle with cancer.
Jeff was born in Assiniboia Saskatchewan on the 15th of May 1966. He received his early schooling in Assiniboia and Moose Jaw before completing the SIAST Accounting Program and obtaining a degree from Minot State University where he made the Dean’s List. After finishing his education, Jeff worked for the Saskatchewan Ministry of Environment in Prince Albert before moving to Calgary in 2001 where he worked primarily in the oil and gas sector while obtaining numerous professional accounting designations.
Jeff’s passion was hiking in the mountains; often as solo hikes but also numerous treks with close friends, his mother, sister, brother, nephews, nieces’, and great nieces’ and nephew. He also travelled extensively throughout the Caribbean, Central and South America, Asia, and India.
He was predeceased by his grandparents Anna and Charlie Kyle, Lena and George Ealey, his father Cameron Ealey, and brother-in-law Ron Collins. Jeff is survived by his mother Myrna, sister Alison, brothers Mark (Barb) and Clayton (Gayle), nephews Brice (Meaghan), Devin (Angie) and Blake, great nephew Brody, and great nieces’ Mea, Laurali and Hailey, as well as numerous cousins and friends.
A special and heartfelt thank you to Edith and Dennis Shurnaik, Linda and Dr. Chris Belan, and Calgary Palliative Home Care team for their tremendous compassion and support to Jeff and family during the last few months.
Per Jeff’s request, a private family interment will take place at a later date at the Hillcrest Cemetery in Limerick, Saskatchewan.