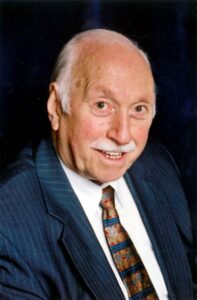 Charles William Cobb, age 88, of Calgary, Alberta, passed away peacefully, surrounded by family, on Wednesday, June 27, 2018. Charlie is survived by his wife, June; daughter Gillian (Paul) Heninger, son Howard (Judith) Cobb, daughter Tracy (Nicholas) Reeves, son Nathan (Natalie) Cobb, and son Jeremy (Kerri) Cobb; sixteen grandchildren, nine great-grandchildren; sisters Paddy Cobb and May Talbot; and many loving extended family members. Dad loved the theatre; he was a showman; an entertainer; an actor; a singer; a handyman and fixer of anything; a tinkerer; a voracious reader; an author of an adventure-thriller novel and many short-stories; an actor in commercials and movies; an electrician; a lover of Jazz, mystery novels, PBS, and Masterpiece Theatre; an avid golfer; a Royal Navy man; a sharp-shooter, a disciple of Jesus Christ; a man of faith and conviction; but most of all he was a there-when-you-need-him father, a grandfather, a great-grandfather, a brother, a son, and a devoted husband who loved to spend time with his family. Charlie was married to his sweetheart June for 65 years. Dad was born in London, England, on June 5, 1930 and spent his childhood “dodging German bombs and scrumping apples from the orchards of Kent” as he liked to put it. He served in the Royal Navy for a number of years after the war, and met and married his lifetime sweetheart, June, while serving aboard the HMS Truelove. He and June moved their young family to Canada in the 1950s, where he found work as an electrician in the old air field where Mount Royal University stands now, and later worked until his retirement fixing and repairing pump equipment for Eagle Pump and Compressors. Dad loved history, especially anything to do with World War II, which shaped his childhood in such a first-hand and significant way, and particularly anything to do with the navy. He could fix anything mechanical, and just had a knack for knowing how to make things work. There was nothing he could not fix. Some of his free time, right up to the last months of his life, was spent at the Bomber Command Museum of Canada in Nanton, Alberta, where he volunteered his talents in restoring and repairing old warplanes, including the Lancaster that gets rolled out and switched on for public viewing every year. Dad loved acting in amateur theatre, and spent much of his free time on stage, appearing in several musicals throughout his life at the Southern Alberta Jubilee Auditorium and at local churches. He was a regular with Workshop Theatre at the Pumphouse in Calgary. He also acted in many commercials, and had small parts in several movies and TV shows filmed locally, including Superman 3 and Macgyver. For the last twenty years of his life he loved singing the oldies every year with the Silver Stars Musical Revue Society of Calgary. It was somehow fitting that on the day he died he managed to watch all of My Fair Lady again, having played both Colonel Pickering and Alfred Doolittle in his day. Dad was a lover-of-life, a practical, down-to-earth man, with a booming stage voice who will always be remembered in our hearts as just Dad. He loved to laugh and tell jokes and stories. He loved to sit in his big chair at night with a good movie or a crossword puzzle to solve, and took seriously his role in ensuring that nothing in the house ever remained broken-down for long. We will miss you Dad. Funeral services will be held for Charlie at The Church of Jesus Christ of Latter-Day Saints – 24 Street Chapel (10923 24 Street SW, Calgary) on Wednesday, July 4, 2018. Visitation will begin at 10:00 AM, with funeral services at 11:00 AM, followed by a light luncheon. Charles will be laid to rest at the Eden Brook cemetery in Calgary, Alberta. A special thank-you goes to Piersons Funeral Home for their kind and attentive service.