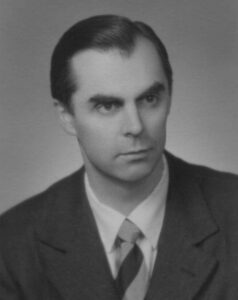 In the early hours of February 7, 2018 Cenek Hynek Vrba quietly slipped off the bands of mortality to join the many dear ones who have predeceased him.

During his brief illness, surrounded by his loving family, Cenek finally passed away peacefully in his sleep, under the watchful eye of his dear granddaughter Erin, who spent every moment with him, night and day since he became ill at the end of January.

Cenek was born on April 10, 1919 in the beautiful small village Studena Loucka in Czechoslovakia. When his father, a former navy officer, began working in civil service, Cenek spent most of his childhood moving from place to place as the family followed his fathers numerous transfers. As a young adult Cenek began his studies in medicine, but was delayed 6 years with the closure of all universities during WW2. Amidst these challenges, he persisted and later became a doctor of veterinary medicine. His career finally brought him to his lifes work as a research scientist and through a love of his chosen field he found great success and satisfaction in his professional life.

A large part of Ceneks life was also devoted to serving in the LDS church. As a result of his strong beliefs, he found himself conflicted with the communist system that had taken over Czechoslovakia in 1948. Regardless, he was unwavering in the practice of his faith. After the 1968 Soviet invasion of his native country, he was faced with the desire for a life of freedom and at the age of 50 he decided to take his family on a great adventure. They escaped across the border to Vienna, Austria with each other, their suitcases and very little money. From there they continued to make their way to Calgary, Alberta, Canada. Building from the ground up, he was quickly able to find employment in his field and spent the rest of his working life as an associate professor at the University of Calgary, directing the Bio Sciences Department. He had great success in research, leaving behind many publications and patents and continued to find great joy in his work.

Now free of the confines of Communism, he was able to openly continue serving in the church. Here, his greatest passion was genealogy and he happily spent many years working alongside his wife in the name extraction program.

Cenek lived an unassuming life, always ready to help others and was never one to judge or argue. Because of his easy-going nature he was able to retain his curiosity and good sense of humour all of his living days. In his gentle sort of way, he was a good example to his family, practicing what he taught, always showing them unconditional love and he managed to thoroughly enjoy a long, prosperous and happy life of almost 99 years.