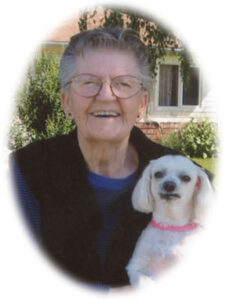 CONNER-THIESSEN, Cathern Amanda April 5, 1924 – October 22, 2013 Cathern Conner-Thiessen passed away on Tuesday, October 22, 2013 at the age of 89 years. Cathern is survived by two sons Charles Conner (Deana) of the Philippines and Howard Conner (Kelly) of Redmond, WA; three grandchildren Lynn, Lorn and Ashlee Conner; and a large extended family. Cathern was predeceased by a son Barney Conner; a brother Russell Owens; a sister Marybelle Jensen; her first husband Robert Conner and second husband John Thiessen. Cathern was born in Newport, Washington, and raised in Vauxhall. She loved her community and actively served at Church and also with the Ambulance Service. She had an artistic flair that was evident in her home decorating, painting, ceramics and music. Cathern was much loved and had a positive influence on many. She will be dearly missed. A Funeral Service will be held at Pierson’s Garden of Peace Chapel, 16 Avenue & Garden Road/100 Street NE, Calgary on Saturday, October 26, 2013 at 11:00 a.m. A Graveside Service will be held at the Vauxhall Cemetery, Vauxhall, AB at 3:30 p.m. Messages of condolence may be forwarded to the family at www.piersons.ca. Arrangements are in care of Pierson’s Funeral Service, Calgary. Telephone 403-235-3602