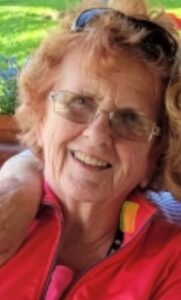 It is with sadness we announce the passing of Carole-Gail Tapping (nee McIntosh) on August 1, 2022, in Calgary, Alberta. Gail is survived by her husband, Bruce; sons, Mark (Madeleine) and Ryan (Katrin); grandchildren, Hunter, Sarah, Grayson and Caelan; brother, Ross and his wife Carole, and many other cousins.

Gail was born on July 14, 1943, in Ville St. Pierre, Quebec to Forituda June (nee Manley) and Earnest McIntosh. Gail married Bruce in 1968 and in 1980 moved from Quebec to Alberta with their two sons. In Edmonton, Calgary, and Lloydminster, Gail formed strong friendships at the Oil Wives of Alberta, but nothing was more important to her than raising her two boys.

Throughout her 79 years as beloved daughter, wife, mother and grandmother, Gail travelled across Canada, attended many hockey tournaments and rugby games, and proudly watched her sons graduate from university. With adoration she attended her granddaughter’s dance recitals and grandson’s hockey games. Her eldest grandson is in post-secondary school focusing on data and technology, reflecting Gail’s attention to detail and processes from her career at Air Canada. Gail’s younger son, Ryan, moved back East to Ottawa with his young family. Fond memories remain of Gail teaching her grandson, Caelan, lullabies virtually during the pandemic and still brings a smile to all.

The family will be celebrating Gail’s life at a private ceremony. We thank all for their kind words and stories of Gail. She will be missed. In lieu of flowers, please direct all donations to Women in Need Society (WINS) of Calgary www.winsyyc.ca/donate-funds