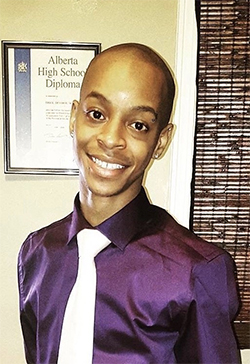 Carol was born and raised in Salt Lake City, UT, on Capitol Hill. She attended West High School with Joseph Fyans III, the father of her four children. They moved to Los Angeles, CA, where he attended dental school, before returning to Salt Lake City. She worked at the University of Utah for over 15 years, helping develop Myriad Genetics and played a key role in the development of AHEC from its conception. In 2002, she met and married John and moved to Calgary, Canada, where she resided for the remainder of her life.

Carol’s talent for bringing people together, her ability to solve problems, and her fun sense of humor touched countless lives. She loved family heritage, genealogy, missionary work, temple work, and serving others. She developed numerous friendships during each stage of her life, enjoying serving those who were ill or lonely, where her time was their time.

Carol loved live music, often attending concerts to dance, even in her later years. “Backstreet Boys were better singers, NSYNC were better dancers”, she stated. Her lifelong hobby as a fashionista, always appearing elegant and youthful. She never stopped learning and growing. At 50, she skydived, inspiring her kids to do the same. Her 70th birthday was celebrated skiing on the slopes of Park City.

She was an amazing mother to her children. She often traveled to their homes, filling them with love. Her time, energy and knowledge continuously enriched their lives. Her grandchildren knew her affectionately as ‘Gammie’, and loved her letters, phone calls, visits and too many gifts. She maintained a beautiful spirit in her home with her husband, their door open for neighbors to stop in for a visit with jazz music playing in the background.

A Memorial Service will be held for Carol at The Church of Jesus Christ of Latter Day Saints on 202 Crescent Road NW on Monday, August 30, 2017 at 11:00am. Carol was interred in the Wasatch Lawn Cemetery, Salt Lake City, Utah on August 16, 2017.