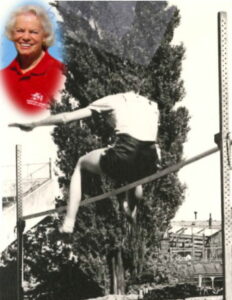 On Sunday, January 24, 2021 Mrs. Carol Kyle beloved wife of Douglas of Calgary, Alberta passed away at the age of 84 years.

Carol was born and raised in Montreal. She was a natural athlete and made all the school sports teams with ease; and was captain of many of them. In 1954 at the age of 18 she won the Canadian Open High Jump Championships with a new record jump of 5 feet, 2 inches. Carol set the record on the same day Marilyn Bell who became the first person to swim Lake Ontario.
Carol married Doug when she was 21 and turned her attention to raising a family. Early on Carol played softball for Dougâ€™s company team and in later years switched her attention to golf, where she had a 9 handicap. She loved golf and played for over 30 years at the Earl Grey Golf Club. When Carol turned 55 she joined the Alberta 55 Plus Association and competed in the Provincial Games and Canada Games in golf, bocce and badminton, and won medals in all.
Carol was inducted into the Alberta Sports Hall of Fame in 2000 as an Honoured Official, for her over 40 years as a track and field official. A Special Honour was her being selected by the Booster Club in 2012 as the Calgary Sportsman of the Year for all her work in Track and Field. She is only the seventh woman to be honoured in the 67 years the award has been going.
With Dougâ€™s job, Carol and the family moved around a little. First in Calgary from 1957 – 1969; then east to Toronto from 1969 – 1974; then back out west to Calgary in 1974 and there they continued to reside. Carol and Doug were married for 64 years.
Carol enjoyed travelling and seeing new things. With Doug, the two travelled around the world and visited every country they wanted to see. From Japan, China, South East Asia, India, Egypt to South Africa, South America, Russia, all of Europe, and the entire United States. Doug and Carol gave up travelling 5 years ago because they had been all the places they wanted to go and see.
Carol was a loving wife, mother and grandmother and instilled the desire in her two children, Suzanna and Robert, to succeed in whatever they did. Suzanna completed her Masterâ€™s Degree in Social Work in England, where she has studied and worked for 30 years, until retirement in 2020. Robert is a Professional Engineering in Environmental Sciences in Calgary.
Carol is lovingly remembered by her husband Doug of Calgary; daughter Suzanna, husband Zen and grandson Alexander of England, son Robert, wife Janet and grandchildren Jennifer and James of Calgary; brothers Dennis Hemmings and Ross Hemmings and sister-in-law Marilyn Smith; and her cat Meah.
Carol is predeceased by her father-in-law Arnold in 1958; her father Ted in 1967; her mother-in-law Orma in 1986; her mother Maureen in 2000; her granddaughter Joy in 2001; her brother Gerry in 2019
Thanks everyone for making this a great life for Carol, she has enjoyed it and is waiting for us all in Heaven.
A Funeral Service will be held for Carol at 2:00 p.m. from Pierson’s Funeral Service, 4121 – 17 Ave SE, Calgary on Friday, February 5, 2021. A link to view the service is posted below.