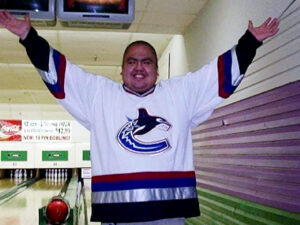 Calvin Perry passed away on Tuesday, May 7, 2019, at the age of 43 years. He will be lovingly remembered by his children Erica and Malachi; parents Gordon and Dianne Perry, of Lacombe, AB; brother Roger (Kim) Perry, and their 4 children, of Chilliwack, BC; sister Marcia (Ronald) Stanford, and their 5 children, of Edmonton, AB; brother Paul Perry, of Airdrie, AB; and many more family and friends. Calvin was born in Port Alberni, BC and when he was 28 months old, he and his younger brother Paul were adopted by their parents Gordon and Dianne in Salmon Arm, BC. He grew up in Salmon Arm and then White Rock, BC. In those growing up years Calvin enjoyed playing soccer and when he was a teenager, he and his brother Paul delivered papers and mowed lawns so they could earn their bicycles and skateboards. The family eventually made Airdrie, AB their home which is where he has lived ever since. In his early adult years, Calvin served a mission for The Church of Jesus Christ of Latter-day Saints in Phoenix, AZ. Later, he was blessed with his two beautiful children Erica and Malachi, whom he loved dearly. He loved sports and was a fan and spectator of many of them, but his favorite was hockey, and he was an avid Vancouver Canucks fan. Calvin will be missed dearly by all who knew him as a loving father, son, brother, uncle and friend. The family held a private graveside service for Calvin in the Fairview Cemetery, Lacombe, AB. A Memorial Service will be held for Calvin at The Church of Jesus Christ of Latter-day Saints – Reunion Chapel (900 Reunion Gateway, Airdrie) on Saturday, July 27, 2019 at 2:00 pm. In lieu of flowers, the family has requested donations toward the purchase of a memorial headstone (https://www.gofundme.com/a-headstone-for-calvin-amp-support-for-his-children).