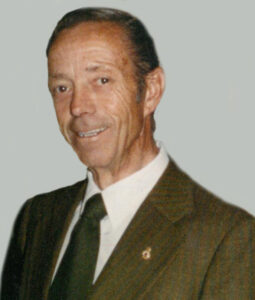 Burke Hansen passed away suddenly on Sunday, September 13, 2015 at the age of 84 years. He was born in the town of Vulcan, Alberta to Hans Henrich (Harry) Hansen and Gladys Brown. Burke served as a navigator in the Royal Canadian Armed Forces during the Korean War. Later, he followed his experience into work as a heavy mechanic for many years. Burke became a passionate member of the local Royal Canadian Legion in 1967, and a determined contributor to the Poppy campaign in recent years. He is survived by his wife Marvel, his children and grandchildren. A Memorial Service will be held for Burke at the Forest Lawn Legion No. 275, 755 – 40 St SE Calgary, on Sunday, October 4, 2015, from 4:00 – 8:00 p.m. In lieu of flowers, donations may be made to the Calgary Poppy Fund (www.calgarypoppyfund.com)