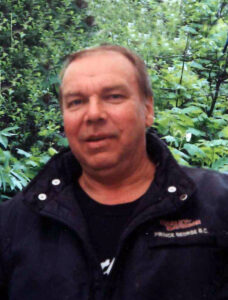 Buddy Pyykonen Sr. passed away on Tuesday April 19, 2016 at the age of 69 years. Buddy Sr. is survived and lovingly remembered by his son Buddy Jr. and Daughter-in-law Tammy; three grandchildren Trista, Tabatha, and Misty; three great-grandchildren Laila (3 years), Claire (1 year), Hunter (3 months); siblings Jack (Taya) Pyykonen, Linda Ambrose, Connie (Gord) Hale, Tammy Sherger; and many nieces and nephews. Buddy, as a long term bachelor, was use to spending time by himself but always had the companionship of his cats. He loved them and doted on them always. Buddy was a very independent, kind-hearted person. In his youth and days of better health, you could count on him if you needed his help and he was capable of giving it. Whether it was helping his brother to build his cabin at the lake, running an errand for his siblings or parents, needing a couch to crash on, a hot meal, or a good western movie his door and his heart was always open to family and friends alike. Through his life, Buddy had many struggles but he always tried his best to persevere and would quietly reflect upon and pray the serenity prayer to provide himself strength for each day. He kept a poster of a passage of scripture from John 3:16 on his wall to remind him of God’s love for him. Buddy liked to reminisce about the time he spent in Texas when he was young as a Ranch Hand as well as his time in Sault Ste Marie working on the freighters in the shipyards at the Soo Locks. He spent many years as a professional mover and was a very hard worker. He was very proud of his years spent as an electrician. After accompanying his son on a number of trips in the Rocky Mountains in his semi truck he was inspired to obtain his Class 1 Professional Driver’s License. He did work as a Truck Driver for a short time. He was especially proud of this accomplishment and retained the professional license for many years after he ended his professional driving career. In his life, Buddy touched many people’s hearts and cultivated a few extraordinary, enduring relationships. There are two specific relationships that his son, Buddy Jr. would like to mention. The first is the relationship that his dad had with his nephew Ricky. Ricky was always there for him when his son was not able to be there. For this, Buddy Jr. will be forever grateful for the relationship they had and that Ricky was such a great friend to his dad. The second is expressing thanks to the woman that Buddy Sr. referred to as being the daughter he never had. Corinne Crawford spent much time with his dad and even lived with him for a time. They built and shared a very close relationship with many wonderful memories. Buddy was a dad, grandfather, brother, uncle, son, and friend. Your pain has now ended and your struggles are all done. Your new eternal life in heaven has just begun and we know it will be filled with happiness and peace. You are now with your mom and dad, along with your beloved brothers that we know you have been missing oh so bad. You will live on in our hearts and memories. You will be forever loved and remembered, but never forgotten.

In lieu of flowers donations towards the bronze memorial would be much appreciated. Donations can be made by calling Mountain View Memorial Gardens, 1515 100 St SE, 403-272-5555. Please reference the memorial donation for Buddy Pyykonen Sr. with account number 0047423.