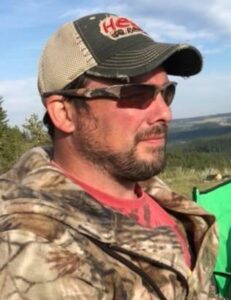 It is with great sadness and a heavy heart that we announce the sudden passing of Bruce Wayne MacDonald (aka Batman) at the age of 43.

Bruce leaves behind to mourn him his wife, Kristie and his blended family of five children, Bruce Marko, Jelena, Sianna, Alex and Tailor. He is also survived by his brother, Adam Macdonald (Chelsea) of Legal, AB; his sister, Meghan MacDonald (Ian Chassian) of Oromocto, NB; as well as numerous nieces and nephews. Also mourning this loss are Kristie’s parents, Sharon & David Heath of Calgary and Warren & Sarah Plewright of Airdrie, and Jason Mattison (adopted brother/friend from childhood) of Calgary; and brothers and sisters in law who all loved him. Bruce is predeceased by and joins his mother, Gwendolyn Macdonald as well as his grandparents, Maurice Bruce and Margaret MacDonald who raised him as their own after his motherâ€™s passing.

Bruce was a New Year’s baby, born in Thunder Bay, Ontario until the passing of his mother at the tender age of 2. He was then taken by his grandparents to be raised in Oromocto, NB with his sister Meghan and brother Adam. Bruce grew up full of energy and lived his life to the fullest. At 18, he joined the Navy to serve his country. Once Bruce left the Navy he moved to Calgary because of his love for the Calgary Stampeders. In Calgary he was blessed with the arrival of his two children, Bruce Marko and Jelena. In 2009, he met the love of his life, Kristie and they were married in 2012 and formed a beautiful loving blended family.

Bruce had a love of Batman and was affectionately called â€œBatmanâ€ by his family and friends. With a name like Bruce Wayne, how could you not embrace the character? He was known to love all Batman paraphernalia and loved to dress up whenever the opportunity would arise.

Bruce was always the energetic guy and a character who lived his life as a free spirit, not worrying about what the world thought. He just wanted to have fun. In every picture he is laughing, smiling and if the opportunity presented itself, a photo bomb was appropriate in his playful mind. He loved camping, wilderness survival, hunting, fishing, off roading and just having fun! He had a way of making you laugh and loved to embarrass you just for fun. Kristie took it all so well and loved his sense of humor. When people would laugh and comment, she would affectionately say, â€œYes, and I get to take him home because heâ€™s all mine!â€ Bruce taught his family to love the outdoors, build a lean-to, build a fire, use a firearm safely, scuba dive, the patience of hunting and fishing while enjoying the beauty of the outdoors.

Bruce especially loved the family vacations. Kristie and Bruce were able to go the Dominican Republic in 2012. In 2016, they packed up their trailer and went to Disneyland, something both wanted to share with the children. The trip proved to be interesting trying to pull a 30 Ft trailer and 5 kids on the California freeways, an experience they will not soon forget. The trip was amazing and they had experiences that will live on in their memories forever.

Recently, Bruce was working for Cabelaâ€™s, a job that fed his passion of the outdoors. On his weekends off he was out camping, off roading or hunting.

At this time, there will not be a funeral for Bruce due to Covid restrictions. The Family would like to be able to have a celebration of his life in the spring, outdoors, in the place he loved the most with all the friends and family he loved and cherished. An announcement will be made through Social Media at that time.

Kristie and the children appreciate all the support and love shown to them by friends and family during this difficult time. Bruce will not be forgotten as his playful, fun loving spirit lives on in our hearts and memories.

Until we meet again, Bruce.