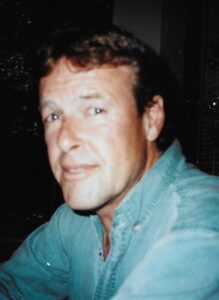 We sadly announce the passing of Brittain Paul Ladouceur. Britt passed away peacefully Monday September 19th, 2022 with his daughter and son-in-law by his side in Calgary, Alberta.

Britt was born June 10th, 1952 to the late Joseph “Pierro” Ladouceur and Myrna Ladouceur, in Sussex, New Brunswick. He was the eldest of three children, Alana (Ken) Pearce and the late Randy Ladouceur.

Britt’s life was filled with adventure, from hitchhiking across Canada with his best friend John Patterson, to working on lighthouses across the west coast. He spent his younger years in and around Victoria, British Columbia. He had a passion for fishing and was always found near the water.

Britt moved east to Calgary, Alberta where he had his daughter, Meghan (Jeremy) Hansen and spent his years driving gravel trucks. He loved his work up until his retirement where he then filled his days with polishing rocks and making Agate wind chimes. Britt will forever be remembered for his love of rocks and minerals, and many fond memories of rock hounding with his friends. He was blessed with a grandson (Owen Hansen) in 2020.

A celebration of life will be held for Britt at his daughters home Sunday, September 25th between 1 pm and 3 pm. 6609 18th Street SE, Calgary Alberta.

A memorial will be held in Sooke, British Columbia, in the summer of 2023.