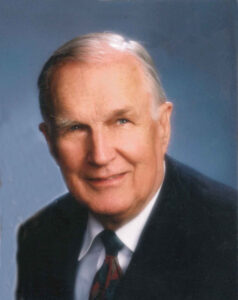 Brian passed away on Saturday, September 17th, 2016, at the age of 87 years. He will be lovingly remembered by his wife of 61 years, Bernice; children, Wade (Gloria) Nelson, Stephen Nelson, Caroline (Richard) Harris, Laurel (Chuck) Ursenbach, Tracey (Glenn) Davidsen, Howard Nelson (Tolu), Barbra (Mathew) Williams; 28 grand-children and 7 great-grand-children; last surviving sister Jean Card and many more family and friends. He was predeceased by his parents, Seth and Mabel Nelson, brothers Reed and David and sisters Marion, Helen and Kathleen. Brian was born in 1929 in Cardston, Alberta, where he was raised. He served a two-year mission for The Church of Jesus Christ of Latter-day Saints in the Eastern Canada Mission. He attended the University of Alberta in Edmonton, where he met his eternal sweetheart, Bernice Bancroft. Brian and Bernice were married in the Cardston Temple. They began their life together in Calgary and were blessed with seven children. Brian began his law practice in Calgary in 1957. He was a partner in the law firms of Nelson, Henders & Hawco, and Nelson Steele. In 1985 Brian joined his son Stephen with his practice, and formed the firm Nelson and Nelson. Brian’s success as a lawyer was due to his personal concern for his clients, whom he always treated with great respect. Brian spent a life of service to his church, serving as Bishop and High Councillor. He loved his family most of all and they have great memories of car trips, bedtime stories and summers in Windermere. Brian retired in 1999 so that he could serve a mission to Mongolia with his favourite companion, Bernice, organizing a scouting program while there. Two more missions were to come with weekly trips to Banff to assist the Branch, then another supervising the Church Service Missionaries in Alberta and part of British Columbia. Brian was a great gardener and kept a vegetable garden for many years. Running was also his hobby, and he kept it up until recently. His greatest legacy however is his example of devotion and care for his wife and family. A viewing will be held for Brian at The Church Jesus Christ of Latter-day Saints – Bow Valley Chapel (2526 – 24 Avenue NW, Calgary) on Saturday, September 24, 2016 from 9:30 – 10:30 a.m. A Funeral Service will be held at the same location at 11:00 a.m. Internment will follow at Queen’s Park Cemetery at (3219 -4th Street, NW, Calgary).